Being at the top end of the spectrum, a 2x8 GB 2800 MHz C12 memory kit actually does not have a lot of competition.  For the round sum of $646 however, the ADATA kit (as well as the others) have a hard time being taken seriously when cheaper kits offer similar performance.  Here is a rundown of 2x8 GB 2666MHz+ kits and pricing as of 12/12:

A ceiling of ~$650 on memory also offers up these opportunities:

So, 2x8 GB 2800 C12 or 4x8GB of 2666 C11, for the same price or cheaper?  This pricing is not endemic by factor of ADATA, it is prevalent throughout memory vendors and thus is leads to the obvious conclusion in the absence of super awesome benchmark results.

We must thank the following companies for kindly donating hardware for our test bed:

In our Haswell memory overview, I introduced a new concept of ‘Performance Index’ as a quick way to determine where a kit of various speed and command rate would sit relative to others where it may not be so obvious.  As a general interpretation of performance in that review, the performance index (PI) worked well, showing that memory kits with a higher PI performed better than those that a lower PI.  There were a few circumstances where performance was MHz or CL dominated, but the PI held strong for kit comparisons.

The PI calculation and ‘rules’ are fairly simple:

That final point comes about due to the law of diminishing returns – in several benchmarks in our Haswell memory overview performed very poorly (20% worse or more) with the low end MHz kits.  In that overview, we suggested that an 1866 C9 or 2133 C10 might be the minimum suggestion; whereas 2400 C10 covers the sweet spot should any situation demand good memory.

With this being said, the results for our kits are as follows: 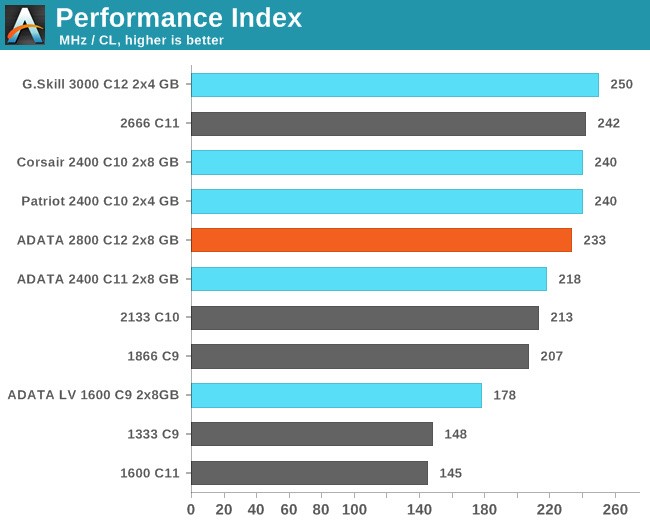 The 2800 C12 kit starts high up our table, but not the best Performance Index.  Given the recommendation list above, 233 is close enough to 240 to be comparable.