Analyzing the Price of Mobility: Desktops vs. Laptops

With that out of the way, let’s focus on the remaining two areas, starting with CPU performance. I’ve grabbed several generations of desktop CPUs from both AMD (K10.5, Llano, Trinity, Bulldozer, and Piledriver – we don’t currently have Richland results, but they’re generally 5-10% higher than Trinity) and Intel (Sandy Bridge, Sandy Bride-E, Ivy Bridge, Ivy Bridge-E, and Haswell) and combined those results with the latest mobile CPUs (Haswell quad-core, Haswell ULT, and Richland). We’ve got two benchmarks that are common to our CPU and laptop we’re going to look at: Cinebench 11.5 (single- and multi-threaded) and x264 HD 5.x video encoding (first and second pass).

Unfortunately, we don’t have results for all of the desktop CPUs in x264 HD 5.x, though you can get an idea of where they should fall by looking at the x264 HD 3.x results. We’ve gone ahead and used the x264 3.x scaling for desktop CPUs where we don’t have 5.x results, and marked those results with an asterisk (*) in the following graphs. The first pass tends to be about 2x as fast with x264 HD 3.x, unless you have four cores with Hyper-Threading in which case scaling is closer to 1.5x (and 6-cores results in scaling of around 1.08x). The scaling in the second pass is much more uniform, with 3.x being around 2.75x as fast as 5.x. Since we’re already comparing apples and oranges in a sense (desktop and laptops, with different motherboard, RAM, etc.) we’re really just interested in an estimate of performance. Do not take the following charts as 100% definitive, but rather as a baseline comparison. 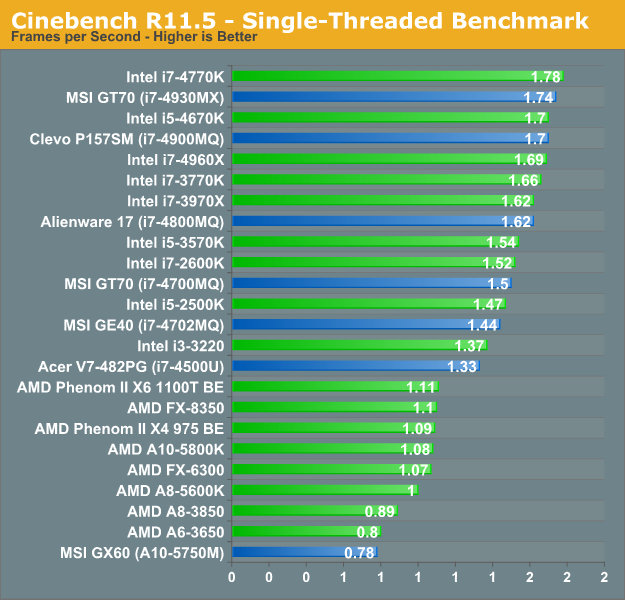 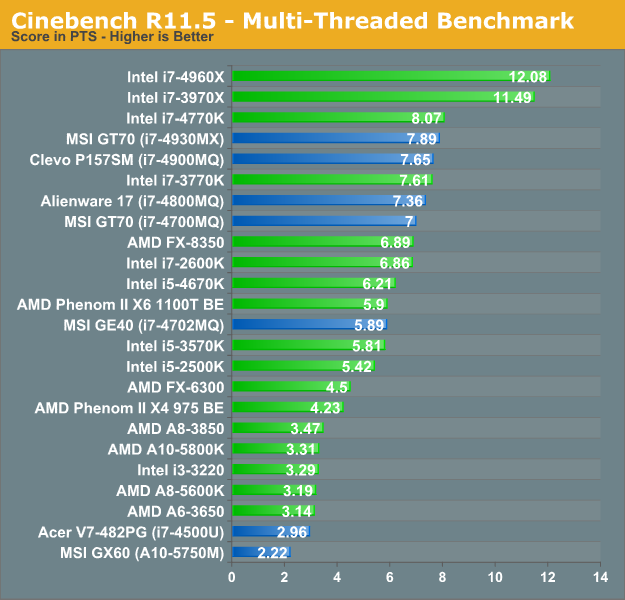 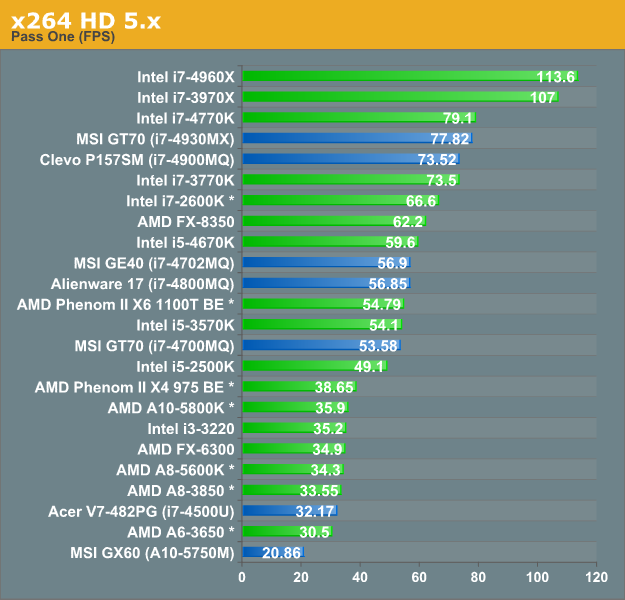 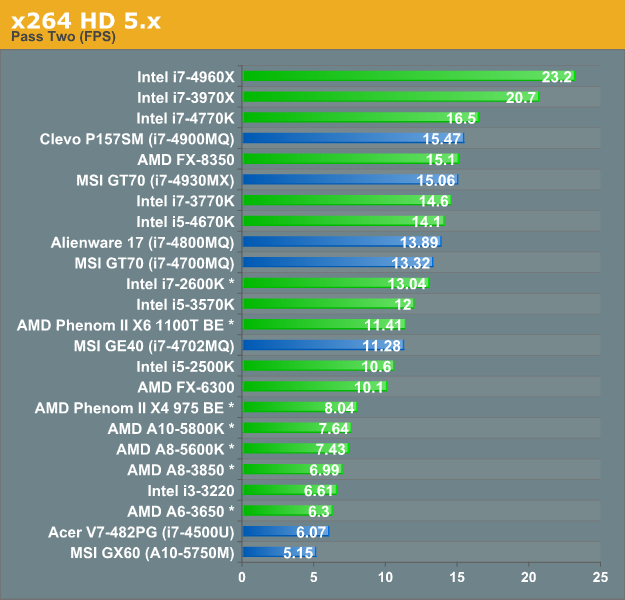 It used to be that if you wanted top CPU performance, a desktop system was absolutely required. These days, for lightly-threaded workloads the gap has narrowed substantially: a moderate i7-4700MQ Intel Haswell processor will get you around 85% of the performance of the desktop i7-4770K, and the i7-4930MX will get you 98% of the single-threaded performance. Even the i7-4500U Ultrabook is able to deliver 75% of the 4770K performance. Move to heavily threaded workloads and the gap grows (particularly if we included the hex-core processors), but the 4700MQ and 4930MX are still 81-87%/91-98% of the 4770K performance – it’s the dual-core mobile CPUs that really take a hit, with the i7-4500U delivering roughly one third (37-41%) the performance of the 4770K. Of course, if you’re not doing CPU intensive tasks like video encoding, the single-threaded performance will be the more pertinent result.

The AMD side of the equation isn’t nearly so rosy, at least if you want performance anywhere near that of a top-end desktop. Llano, Trinity, and Richland have been far more focused on reducing power use and increasing integrated graphics performance than on boosting CPU performance. The result is that in single-threaded performance, the fastest mobile Richland APU is less than half the performance of the 4770K, and in the multi-threaded tests it’s 26-31% of the 4770K performance. Comparing mobile Richland to desktop AMD parts doesn’t really help much either: in the single-threaded Cinebench result, it basically matches the Llano A6-3650 and is 12% slower than the A8-3850, while it trails most of the other AMD CPUs/APUs by nearly 30%. Move to multi-threaded workloads and it’s only able to deliver 30-60% of the more powerful AMD desktop APUs (and 60-80% of the desktop Llano APUs). Richland is still “fast enough”, but it’s definitely a value proposition as opposed to a performance option – the iGPU of Richland may be faster than HD 4000/4400/4600, but dGPUs like the GT 730M are still roughly twice as fast and available for not much more money. But we’re skipping ahead….

Summarizing the general performance of our mobile platforms, we’re able to come pretty close to the performance of desktop systems, and while there’s still a price premium in effect it’s definitely getting smaller than in the past. The least expensive laptop/notebook I can find right now with a quad-core Haswell CPU is the HP Envy 15t-j000, which you can currently get for $700 after the $100 instant discount. That will get you 8GB RAM, 1TB HDD, and Windows 8, but not too much else. Adding a 1080p LCD ($50), GT 740M ($70), and a backlit keyboard ($30) brings the total to $850. That’s roughly the same performance as a Sandy Bridge i7-2600K, and slightly faster than the Haswell i5-4670K. You can get a pre-built desktop from Newegg for $700 (which adds in an HD 7750 GPU), while a DIY system with similar specs to the laptop (e.g. no dGPU) will set you back $672 (see table below) – not including a mouse, keyboard, display, or speakers.

In other words, if all you want is a computer for moderate needs, it’s not hard to see why laptops are displacing desktops for many people. In this case we’re able to get the same level of performance for potentially less money (depending on whether or not you need to buy an LCD, keyboard, and mouse). Desktops are still going to be far more upgradeable, and you can take a “basic use” desktop like the one above and upgrade it with a high-end graphics card for $300 to get a potent gaming PC. Adding more memory, more storage, upgrading the motherboard and CPU, etc. are all things that you can do with a desktop, whereas with laptops typically only the RAM and storage can be upgraded/replaced and if anything else breaks you’ll have to send it in for repairs (or buy a new laptop).p

We can go down to lower price points of course – there are desktop PCs with moderate hardware starting at just over $300, and they’re still more upgradable than laptops, but similar performance laptops can be had for about the same price, especially if you look at some of the previous generation hardware. It’s mostly a question of how much performance you want/need, and whether you’re interested in the potential to upgrade components down the road. If you don’t have any plans of adding more RAM, storage, or a GPU the case for laptops is stronger now than ever. And let’s not forget that most laptops have an idle power draw south of 20W, compared to 40-60W for a typical desktop (and that’s not including the display or speakers on the desktop), so the energy factor also favors laptops.