Cooler Master has been fairly gung ho on the PR side about their Storm Scout II Advanced. While we missed the opportunity to review its predecessor, the Storm Scout II, we aim to rectify that omission by putting this new semi-portable ATX chassis through its paces. Cooler Master has a long history of strong enthusiast offerings (with their HAF line being particularly well loved), but does the Storm Scout II Advanced inherit that legacy of greatness or are they falling behind the curve? 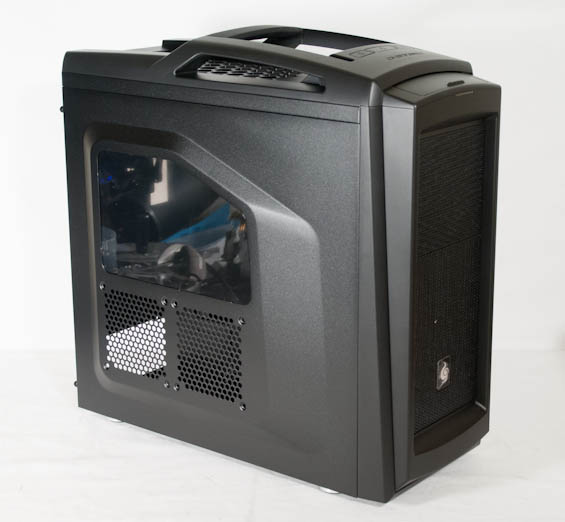 Unlike the HAF series, the Storm Scout II Advanced benefits from a cleaner design with rounded angles and smooth lines. There are a trio of handles on the top of the case to make moving it between LAN parties (or really, just moving it in general) easier on the end user, and Cooler Master includes a fairly traditional positive pressure cooling system, with two red LED fans (LEDs can be toggled off) in the front of the chassis and a single exhaust fan in the rear. As has become de rigeur, it features support for a 240mm radiator in the top, but its primary function is to be a sleek, semi-portable gaming case.

The Storm Scout II Advanced isn't particularly light, but it's well built, using a combination of SECC steel and plastic. This is a case that really is designed to be moved, though components are going to add close to another ten pounds to its weight. Where I think things take a little bit of a turn is in the cooling system design; simply put, we've seen this before. A lot. And the lack of any 140mm support of any kind is crippling to the case's cooling potential at a time when many manufacturers are making the shift to larger fans.