Small Form Factor (SFF) PCs are becoming quite popular as the processors become more and more power efficient. Over the last few years, we have had a slew of budget SFF PCs. We have a number of powerful units targeting the mid-range and high-end markets such as the CoreHT and the Vision 3D series from ASRock. However, the sales volume lies in the budget lineups. Companies like Asus, ASRock, Sapphire and Zotac have been playing in this segment of the market. The trend started with pure Atom based nettops. The ION-based nettops brought HD video decoding and limited gaming capabilities to the budget lineups. AMD joined the game late with their AMD Fusion-based Brazos offerings early last year. Almost all of these offerings come to the consumer in the form of mini-ITX boards. 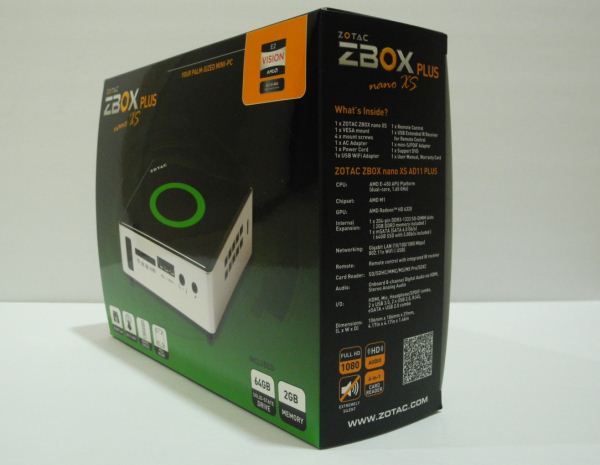 Today, Zotac is launching their AMD E-450 based custom sized solution, the ZBOX Nano XS AD11 Plus. The motherboard of the unit measures 10 cm x 10 cm, which is smaller than the nano-ITX (12 cm x 12 cm) and just slightly bigger than the pico-ITX form factor (10 cm x 7.2 cm). The system comes in at 10.6 cm x 10.6 cm x 3.7 cm, and is definitely one of the smallest machines we have reviewed. One of the biggest impediments to the miniaturization of PCs is the presence of a 2.5" drive in the system. The advent of mSATA and the increasing number of mSATA SSDs in the market provides an opportunity for system builders to drive down the size and volume of their PCs. Zotac has indeed done this with the ZBOX Nano XS AD11 Plus. Instead of a 2.5" hard drive common in other budget SFF PCs, the unit comes with a 64 GB mSATA SSD.

The picture below shows the size of the ZBOX when compared with an ASRock Vision 3D mini-ITX motherboard based PC. The PC is indeed quite small and it even fits in one's palms 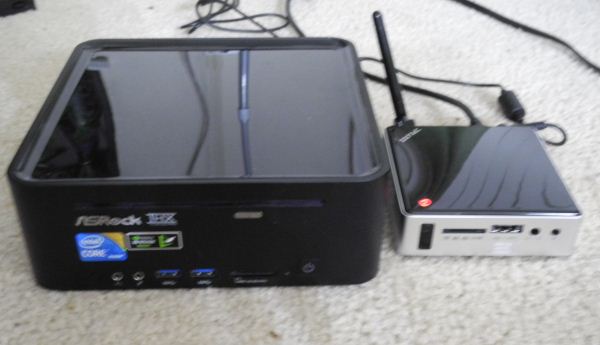 The table below summarizes the specifications of the ZBOX Nano XS AD11 Plus.

The unit is also VESA mountable on the back of a LCD TV or monitor. In the rest of the review, I will first talk about the unboxing and setup impressions, followed by general performance metrics. A small PC like the ZBOX Nano XS AD11 Plus could easily find a role as a dedicated media playback HTPC, and we will cover some HTPC aspects before providing our final verdict.