For several years, virtually every single one of our buyer's guides has come out with the statement that AMD is the preferred platform for price/performance over Intel. This was simply a matter of choosing the best platform, which has been AMD's K8 processor architecture for about three years. Unfortunately for AMD proponents, this is no longer the case. Simply put, Intel has crushed one out of the ballpark with the launch of the Core 2 platform. If you are looking for faster processor performance, with very few exceptions Intel now holds the lead. The good news is that the AMD platform still has a couple points in its favor. We will get into those shortly, but let's start with the baseline AMD recommendations.


With prices being what they are, there's absolutely no reason to consider anything other than a dual core processor these days for a midrange computer. Not everyone is going to make full use of both processor cores, but even in everyday computer use the dual core systems feel more responsive and multitask better, and we only expect the gap between single core and multi-core configurations to widen in the future. That doesn't mean you need to go out and purchase the fastest dual core processor you can find, and in fact we have gone with the slowest Athlon X2 currently available, the 3800+ for socket AM2. Clocked at 2.0 GHz and sporting 512K of L2 cache, the 3800+ used to cost over $300 just a few months ago. With the price now cut in half, there's a whole lot to like. Overclocking capabilities are still good, and it should be pretty easy to run the 3800+ at 2.5 GHz if that's what you're after. Most people don't run a lot of CPU limited applications, so upgrading to a faster processor shouldn't be your first move unless you specifically run tasks that will benefit.

The biggest advantage of the AM2 platform is undoubtedly in the area of motherboards. Prices are so low on reasonable motherboards that we feel there is little reason to get anything other than a board that supports either SLI or CrossFire, at least in the midrange price segment. You may not need the second X16 slot initially, and perhaps it will never get used, but the cost of adding the second slot is only about $20, and you often get better features along with the additional PEG slot. We feel the best overall choice for midrange AM2 motherboards is the nForce 570 SLI chipset. Performance nearly matches the more expensive nForce 590 SLI offerings but at a significantly lower price. Doubling the PCI-E bandwidth sounds good in theory, but the reality is that very few tasks are truly bandwidth starved from the PCI-E bus.

Having decided on a chipset, the overwhelming favorite motherboard using this chipset would be the EPoX 570 SLI. If you can find one in stock at a reasonable price, that would be our primary choice, but at present most online retailers are on back order. A very good alternative is the MSI 570 K9N SLI Platinum, which still overclocks reasonably well. It also costs less than the EPoX board and it comes with FireWire support. The Northbridge heatsink can get quite hot without some form of active cooling nearby, but in a properly ventilated case with a typical CPU HSF, it shouldn't present any problems. 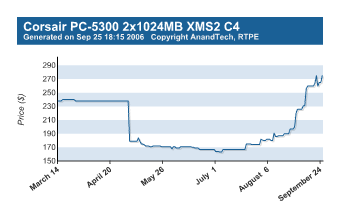 The one area that is an absolute shock after the last midrange guide is the choice of DDR2 memory. A few months ago, it was possible to find 2x1024MB of reasonable quality DDR2 memory for under $150. At present, prices are up over $50 across the board. The situation is illustrated nicely by this price graph of the Corsair PC2-5300 C4 memory. If you browse through the DDR2 section of our Real Time Price Engine, you will see this same type of graph again and again. Unfortunately, all we can do for now is hope that prices will drop, but anyone looking to purchase memory right now will simply have to bite the bullet. Thankfully, the GEIL PC-5300 2x1024MB Value memory that we selected performs very well. While it is rated at DDR2-667 5-5-5-15, we have found in testing that it will run at 4-4-4-10 with 1.95V at DDR2-667, 4-4-4-12 at DDR2-800 with 2.1V, and 5-5-5-15 at DDR2-900 with 2.3V. The integrated memory controller of the AM2 platform makes memory bandwidth less of a concern, but it is still nice to get memory that can run at DDR2-800 if you want to do some overclocking.

Choosing a good midrange video card really isn't too difficult, provided you know the intended use. For our baseline midrange configuration, we are going off the assumption that gaming isn't a primary concern. Taking a quick look at the $100-$125 GPU market, the NVIDIA GeForce 7600 GS comes out as the overall best performance and value. More importantly, the Gigabyte card received our editor's choice in the silent GPU roundup last month. This card consistently outperformed the other silent offerings, and it even manages to do so at a lower price than many of its direct competitors. Windows Vista will make GPUs more important for general use, so we don't feel that any new midrange system should go any lower than the 7600 GS. And even if we say that gaming isn't a primary concern, the 7600 GS is still able to handle most current games at moderate detail settings.

We will leave discussion of the remaining baseline component choices for the next page where we cover the Intel baseline platform, as the only difference between our AMD and Intel choices are in the motherboard and processor departments. If you're looking for other alternatives, however, we do have a few suggestions.

We already mentioned the Epox 570 SLI motherboard, but if you are absolutely certain you don't want the second X16 PCI-E slot, the DFI Infinity NF4 Ultra2-M2 is getting a great reputation as an overclocking king and it is $95 now. It is based on the nForce4 chipset but it still works with socket AM2. Really, the difference in performance between nForce4 and nForce 5 is negligible for most applications, and the DFI Ultra2-M2 is absolutely rock solid when it comes to stability.

Alternatives for the memory are easy to find, although we would stick with DDR2-667 or faster memory. All of the major manufacturers have reasonable products, and right now price is going to be a in determining which RAM to buy. A-DATA, Corsair, Crucial, G.Skill, Kingston, OCZ, PDP, PQI, and others are worth considering, and you might also want to check out the Value DDR2 section of the Conroe Buying Guide for more information. Gamers will probably want a faster graphics card, and we recommend looking at our upgraded configuration for more information on faster graphics cards. What about 2x512MB of RAM instead of the full 2GB? Windows Vista is really going to tax 1GB systems, and we feel strongly that any midrange PC should be viable without upgrades for at least the next year. We feel you are truly going to regret going with anything less than 2GB of memory in the near future, and we only recommend 1GB configurations for entry level computing these days.