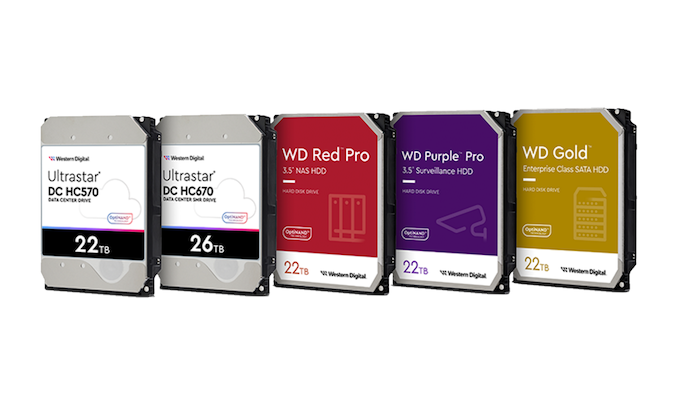 Western Digital is announcing the sampling of its new 22TB CMR and 26TB SMR hard drives today at its What's Next Western Digital Event. As usual, the hyperscale cloud customers will get first dibs on these drives. The key takeaway from today's presentation is that Western Digital doesn't yet feel the need to bring heat-assisted magnetic recording (HAMR) into the picture. In fact, WD is doubling down on energy-assisted PMR (ePMR) technology and OptiNAND (introduced first in the 20TB CMR drives). WD is also continuing to use the triple-stage actuator that it started shipping in the first half of 2020 in the new drives. It goes without saying that the new high-capacity drives are helium-filled (HelioSeal technology). The main change common to both drives is the shift to a 10-stack design. 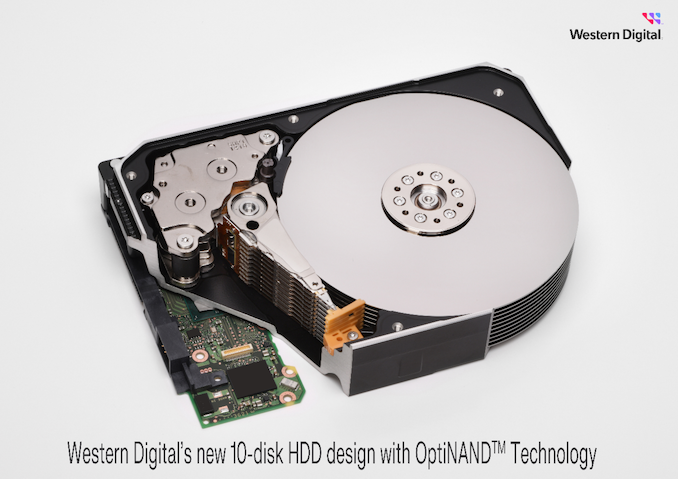 The SMR drives are getting an added capacity boost, thanks to WD's new UltraSMR technology. This involves adoption of a new advanced error correction algorithm to go along with encoding of larger blocks. This allows improvement in the tracks-per-inch (TPI) metric, resulting in 2.6TB per platter. The new Ultrastar DC HC670 uses ten platters to provide 26TB of host-managed SMR storage for cloud service providers.

As part of the announcements, WD also provided additional details on the caching feature enabled by OptiNAND - ArmorCache. Last year's announcement was quite light in terms of actual performance numbers, but the 20TB OptiNAND drives have been out in the market for a few quarters now. 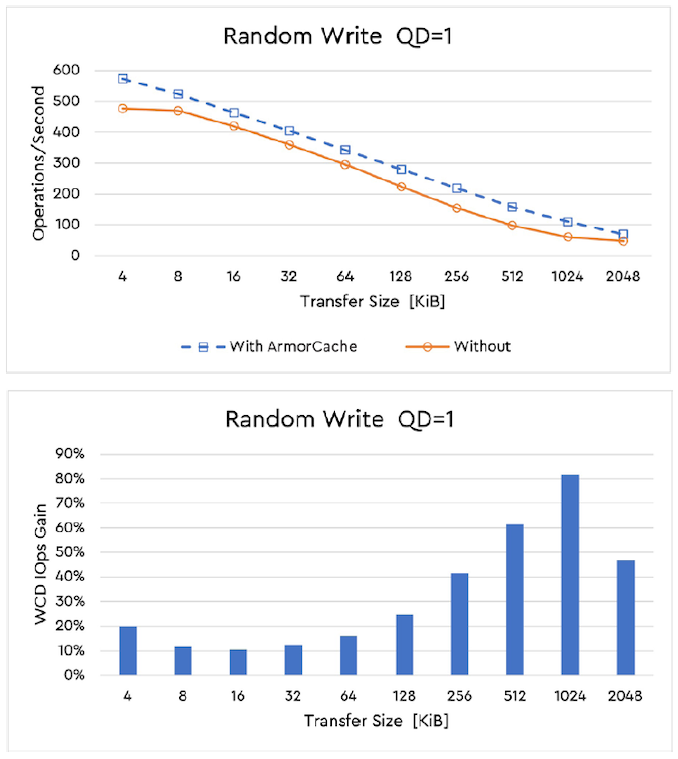 The UFS-based iNAND package helps the OptiNAND-based HDDs deliver upwards of 80% improvement in IOPS for low-queue depth large-sized random writes (10% - 20% improvement for small-sized writes) in use-cases where the write cache is disabled. Since non-OptiNAND HDDs can only cache whatever can be flushed out to the serial flash during emergency power-off situations, the larger cache size afforded by the iNAND device relaxes this limitation considerably. As discussed in the OptiNAND announcement coverage last year, use-cases with write caching enabled benefit from the EPO data protection afforded by the iNAND device. Enabling write caching often requires hosts to send out cache flush commands to the HDDs. These commands require the HDD to stop accepting new commands until the completion of the flush, resulting in loss of performance. The ArmorCache makes these flush commands unnecessary, allowing the drive to be used with full performance with no risk of data loss due to EPO.

The 22TB Ultrastar DC HC570 and 26TB Ultrastar DC HC670 are currently sampling to hyperscalers. Volume shipment of the CMR drive to the channel is set for the next quarter. The Ultrastar HC HC670 is a host-managed SMR drive, and will hence ship only to select customers around the same timeframe. Western Digital will be delivering variants of the CMR drive across its HDD portfolio - 22TB WD Purple Pro for surveillance NVRs, WD Red Pro for NAS systems, and WD Gold for SMB and enterprise customers in summer.

The updated capacity points - in particular, the jump in the SMR drive capacity - delivers clear TCO benefits to WD's cloud customers. Crucially, WD believes it has enough trust in its ePMR setup to deliver 30TB+ HDDs without having to go the HAMR route. From a technology perspective, this will make the upcoming roadmap / product announcements from Seagate (HAMR deployment for publicly-available drives) and Toshiba (need for any technology beyond FC-MAMR) interesting to watch.