The performance of the OWC Envoy Pro Elektron in various real-world access traces as well as synthetic workloads was brought out in the preceding sections. We also looked at the performance consistency for these cases. Power users may also be interested in performance consistency under worst-case conditions, as well as drive power consumption. The latter is also important when used with battery powered devices such as notebooks and smartphones. Pricing is also an important aspect. We analyze each of these in detail below.

Flash-based storage devices tend to slow down in unpredictable ways when subject to a large number of small-sized random writes. Many benchmarks use that scheme to pre-condition devices prior to the actual testing in order to get a worst-case representative number. Fortunately, such workloads are uncommon for direct-attached storage devices, where workloads are largely sequential in nature. Use of SLC caching as well as firmware caps to prevent overheating may cause drop in write speeds when a flash-based DAS device is subject to sustained sequential writes.

Our Sequential Writes Performance Consistency Test configures the device as a raw physical disk (after deleting configured volumes). A fio workload is set up to write sequential data to the raw drive with a block size of 128K and iodepth of 32 to cover 90% of the drive capacity. The internal temperature is recorded at either end of the workload, while the instantaneous write data rate and cumulative total write data amount are recorded at 1-second intervals.

The Elektron does not acquit itself favorably on the power consumption front. We see a peak around 4.8W, and average active power consumption during the course of the workload is north of 2W (slightly more than the DIY solution based on the same bridge chip). The drive also seems to spend a significant amount of time in garbage collection / SLC cache recovery after workload completion (as seen in the 2.5W plateau in the graph), which prevented it from going to sleep in the typical duration taken by other portable drives.

The OWC Envoy Pro Elektron is currently on Amazon for $229. The closest competitor to this product is the Sabrent Rocket Nano Rugged at $170. While the review couldn't include direct performance comparison (we do not have data for the 1TB version of the drive), the specifications are similar - a rugged IP67 rating, a Phison E13-based internal SSD, and an all-metal enclosure. The Rocket Nano Rugged also includes a rubber bumper. On the other hand, the OWC has a more stylish industrial design, and bundles an attached Type-C to Type-A adapter with the cable (ensuring ability to use with multiple systems in an easier manner compared to carrying two different cables). It also uses an ASMedia bridge chip (which continues to have a better reputation in the market compared to JMicron's offerings, though we have not observed much of a difference in our own tests). Whether those aspects are worth the additional $60 premium is for consumers to decide. 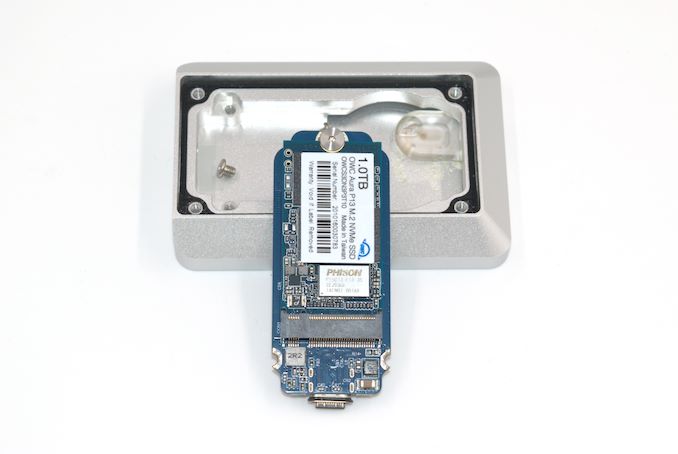 In conclusion, the OWC Envoy Pro Elektron is a premium portable SSD that meets OWC's performance and ruggedness claims. There are cheaper alternatives, and there are units that provide better performance at the cost of compactness and/or consistency. However, the OWC Envoy Pro Elektron provides a unique combination of these aspects, partially justifying the pricing. Such additional options in the market are always welcome from a consumer viewpoint.