One of the most unique models on the Z590 chipset is the GIGABYTE Z590 Aorus Tachyon. While it functions as a 'relatively' normal day-to-day motherboard, the main focus is on extreme overlcoking. Building on the design of its previous XOC models, which are part of its long lineage of performance-inspired designs, the Tachyon has just two memory slots that have been designed to shorten the distance between the memory and the CPU for improved latency and overall performance. The PCIe slots are also designed to allow for massive GPU coolers as well as ancilliary power connections for graphics benchmarking. Other features include an extensive toolkit for overclockers, plenty of premium controllers such as 2.5 Gb Ethernet, Wi-Fi 6E, and a premium onboard audio solution. Aiming to offer a solution that extreme overclockers can push Rocket Lake to its breaking point, as well as plenty for less aggressive enthusiasts, the GIGABYTE Z590 Aorus Tachyon looks to take Z590 to the next level.

Getting the most out of Intel's Rocket Lake silicon requires a solid platform with multiple aspects, and there are quite a lot of premium Z590 models capable of pushing the limits of both the memory and CPU. One of the more specific models aimed purely at squeezing as much performance from Rocket Lake is the GIGABYTE Z590 Aorus Tachyon. Designed for overclockers, particularly extreme overclocks wanting to go sub-zero, the Z590 Aorus Tachyon has one of the most interesting designs with an extended ATX sized frame but with just two memory slots.

GIGABYTE has adapted the memory slots to get closer to the CPU socket, reduce latency, and allow for high-speed memory overclocks. GIGABYTE has DDR4-5333 memory from both Kingston and TeamGroup on its approved compatibility lists. Still, GIGABYTE's own legendary overclocker Hicookie has already achieved DDR4-6623 with the Tachyon with the help of liquid nitrogen (known in the business as LN2), which is very impressive and a testament to GIGABYTE's engineering capabilities. 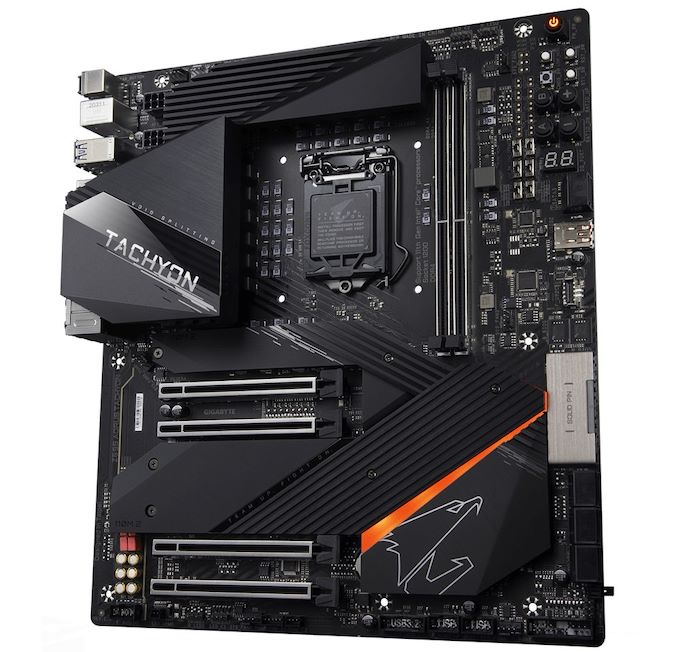 Aside from the memory slot layout, other notable design aspects of the Tachyon is the PCIe slot placement. Here GIGABYTE has gone for an elongated layout, allowing extreme overclockers enough room at the top for the CPU cooling, or for two graphics cards for large copper liquid nitrogen cooler pots, or graphics cards with modified power delivery. Here's an example of GIGABYTE's extreme overclocker HiCookie getting the board ready for breaking world records. 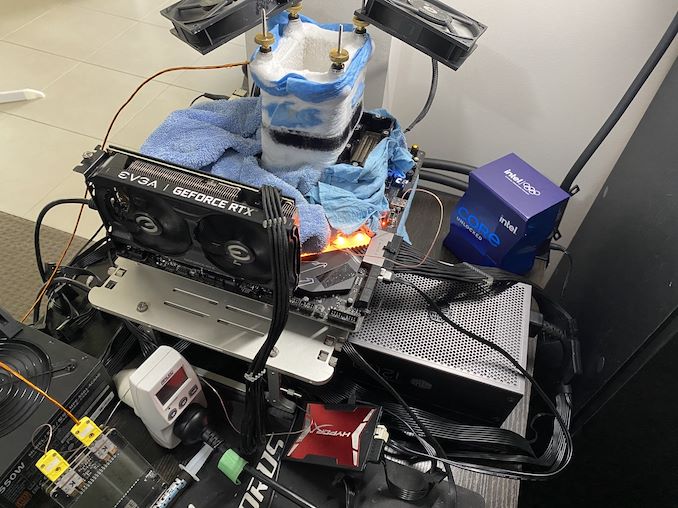 At the top is the copper pot for pouring in liquid nitrogen, while the board is protected from moisture due to the cryogenic cooling. Underneath the towelling, the motherboard is often additionally prepared with protective moisure coating, such as liquid eletrical tape or artists eraser. As seen in the picture above, the board also includes a right-angled 24-pin power connector, making cable management easier. 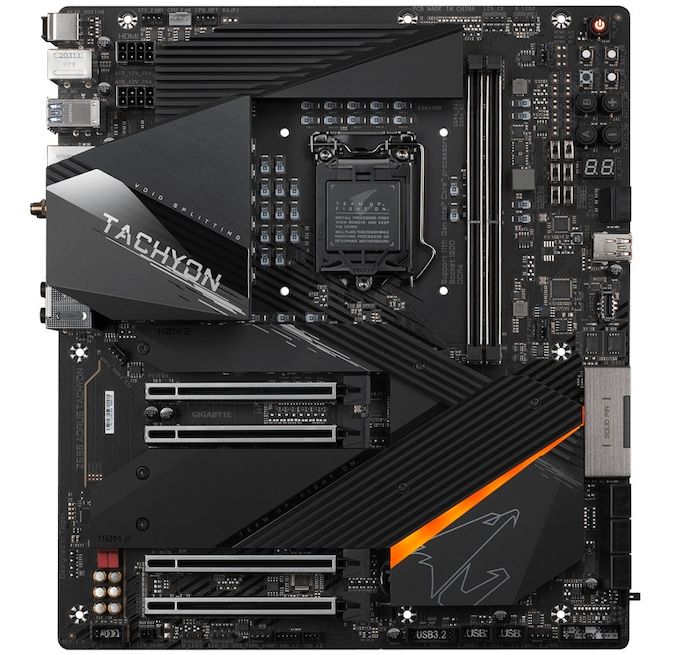 The CPU socket area is physically almost flat and clear of any extraneous capacitors that might come off when removing some of the moisture protection, as traditional motherboards can sometimes have that issue. The near flat and clear design helps mounting copper pots for sub-zero overclockers, with bare sockets much easier to insulate to prevent condensation from forming on the electronic components and circuitry.

Focusing more on the power front, the GIGABYTE Z590 Aorus Tachyon uses a 12-phase design with a direct design. It uses high-quality 100 A power stages, with Tantalum Polymer capacitors, further enhancing the specifications and adding certain design characteristics associated with extreme overclockers. The overall design is all-black, with a single RGB LED strip separating the chipset heatsink from the PCIe slot armor and M.2 heatsinks.

Looking at the conventional features of the board, two full-length PCIe slots are operating at PCIe x16 and x8/x8, with two full-length PCIe 3.0 slots that are electronically locked down to x4 and x1, respectively. For storage, GIGABYTE includes one PCIe 4.0 x4 M.2, two PCIe 3.0 x4, and SATA M.2 slots, with eight SATA ports. Six of these are from the chipset and support RAID 0, 1, 5, and 10 arrays, while the other two are running from an ASMedia SATA controller. Networking is handled by a pair of Intel controllers, including 2.5 gigabit Ethernet and the latest Wi-Fi 6E CNVi, as well as plenty of premium connectivity, including USB 3.2 G2x2 Type-C, HDMI 2.0, and a premium onboard HD audio codec.

In our performance testing, the Z590 Aorus Tachyon displayed strong and efficient power consumption performance, with equally competitive performance in our POST time testing. In our computation performance, the majority was either leading or highly competitive, except in our WinRAR benchmark, which was still decent, but not to the level of other boards on test. But the question is if it overclocks any good. We don't do sub-zero overclocking here at AnandTech often, so we want to see if this board offers something to casual users as well. 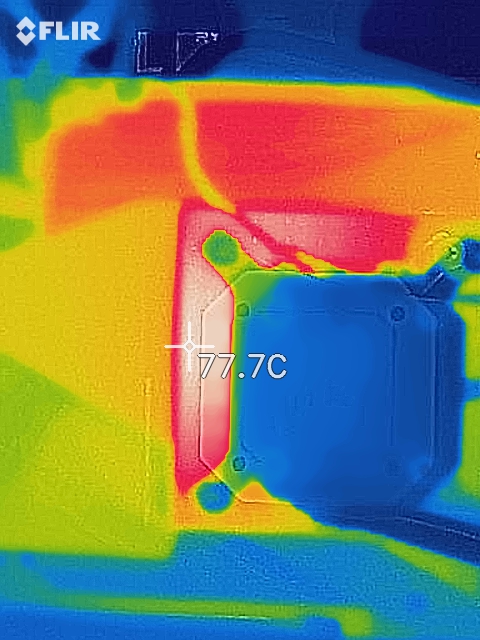 We managed to overclock our Core i9-11900K to 5.3 GHz stable on all cores, which is the highest overclock we've achieved with our testbed processor since we began testing Z590. In our manual testing, we saw good levels of CPU VCore under-compensation, which means the Tachyon is using less CPU VCore than it needs at full-load, despite setting higher variables in the firmware. This had a positive effect on both CPU core temperature and power consumption, which shows the efficiency of the power delivery and the board's design. Our thermal testing on the power delivery confirmed our finding, with temperatures ranging from 64ºC to 77ºC across the integrated thermal sensor and our pair of K-type thermocouples. A lot of the heat from the power delivery is, however, being dumped into the power plane, which means it is hotter than the actual componentry of the power delivery itself.

As the GIGABYTE Z590 Aorus Tachyon represents a tiny handful of overclocking focused boards, there's not much competition. It isn't easy to track down at regular retailers like Amazon or Newegg at the time of writing, although we found it at B&H for $530 on pre-order. Other overclocking-focused models include the ASUS ROG Maximus XIII Apex ($599), with ASRock's Z590 OC Formula also another to consider, although it also isn't available at retail yet. It would be difficult and somewhat unfair to compare the Z590 Aorus Tachyon directly to most other Z590 models, given its overclocking-based feature set. Still, it does have plenty of conventional usability with 2.5 GbE, Wi-Fi 6E, and decent rear panel connectivity.

Read on for our extended analysis.