At the start of 2021, Intel has unveiled its latest desktop platform, designed primarily for its Rocket Lake 11th generation processors. Intel is officially moving to PCIe 4.0, with the top SKU Core i9-11900K supposedly offering a large jump in IPC performance compared to the previous generation. The new chipset moves to double bandwidth to the CPU, allowing for more hardware to make the most of the chipset at once. It also moves to DDR4-3200 support, a new peak in a product line that was previously on DDR4-2933. The new Z590 chipset is Intel's flagship, designed for Rocket Lake, but offering backward compatibility with Comet Lake processors. We take a closer look at the large variety of new motherboards set to come to market.

As is usual with a new platform launch, we reached out to every motherboard vendor for their Z590 model list, images, and specifications. Every vendor we spoke to had something on hand, however some products are still under development for launch over the next couple of months. As a result, we have put as much information as we have into this single article to date, and as information is provided, this article will be updated. At the time of publication, we have details of 50+ motherboards. We will endeavor to keep this Z590 overview updated with the latest information, including pricing and new models.

Due to the size of the core being used, the newest Rocket Lake flagship is only 8 cores compared to the previous generation's 10, but by contrast, Intel has put a few new features onto the leading flagship chipset, and a number of vendors are straight out of the gate with a wide variety of models and price points. There are two (or three)big differences between the new Z590 and the previous flagship Z490.

First up is the CPU-to-chipset link, which has been doubled from a DMI x4 link to a DMI x8 link. This means an effective CPU-to-chipset bandwidth of a PCIe 3.0 x8 link, and suggests that two PCIe 3.0 x4 drives can be attached and run at full speed.Out of all the 500-series chipsets, we are under the impression that Z590 is the only one that will do this, with all others forcing an x4 link. Also, the x8 link only works with Rocket Lake CPUs, and will downgrade to x4 with a previous generation processor. 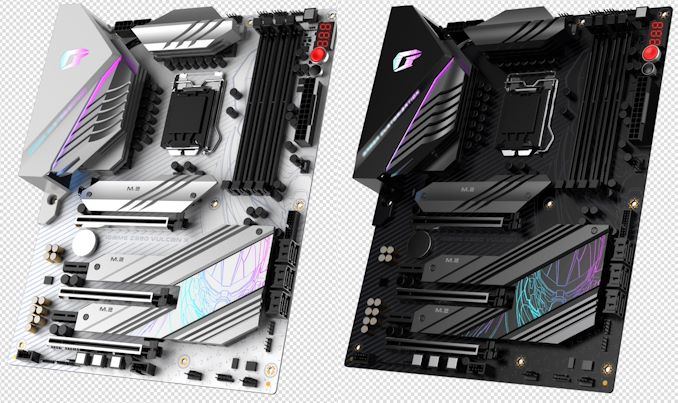 The second big difference is that the Z590 platform will enable the processor to use PCIe 4.0. Intel will include native CPU PCIe 4.0 support for the first time, 20 lanes of it, which will enable a full x16 link for add-in cards as well as another PCIe 4.0 x4 for storage. Vendors will be able to split that x16 as required, similar to previous mainstream motherboards, into an x8/x8 or x8/x4/x4 bifurcated solution, with appropriate muxing.

The third update is native USB 3.2 G2x2 (20 Gbps) Type-C support from the chipset. Motherboards that take advantage of this feature will likely enable it either on a front panel or rear panel connector, although it is optional and some of the cheaper models might not have the port.

Intel is also offering better memory support on its 11th Generation processors, which have been upgraded from DDR4-2933 to DDR4-3200. This means that motherboard vendors are building the base specifcation to meet this DDR4-3200 at JEDEC specifications, but most will go beyond this for overclocked memory. Due to the ratio jump, it means that we have motherboards offering up to DDR4-5333, although buying that memory will cost a lot of money. Note that memory profiles higher than DDR4-3200 are classified as overclocking, which officially nullifies any warranty. Intel does in itself offer what it calls PTPP, the Intel Performance Tuning Protection Plan, which is a warranty that can be purchased directly from Intel for an additional cost.

The new Intel Z590 chipset now includes native support for USB 3.2 Gen 2x2 20 Gbps Type-C connectivity. On the previous Z490 chipset, vendors needed to use additional controllers, such as the ASMedia ASM3242, plugged into the PCIe lanes from the chipset.

Networking is also a focal point for vendors, with Intel continuing to build in a native Wi-Fi 6 MAC into the chipset, accessible through Intel's proprietary CNVi interface. Vendors will enable this through Intel's latest AX201 or AX210 Wi-Fi 6 RF modules, or the new Intel Killer AX1675 (because if you hadn't heard, Intel purchased the company behind the Killer networking chips).

For wired connectivity, Intel identifies support for 2.5 gigabit Ethernet as a key feature for the new chipsets, however this isn't anything special, as it works the same as in previous generations - motherboard vendors just buy a 2.5 GbE PCIe chip and attach it to the chipset. Though usually when Intel advertises it like this, then there's a combo sale for vendors who buy the chipset along with the Intel branded network controller, so we're going to see a push for 2.5 GbE networking on Z590.

Another new feature found on Z590 models is Intel's Maple Ridge Thunderbolt 4 connectivity. Despite there being little difference between Thunderbolt 4 and the previous Thunderbolt 3, as both allow for 40 GBs of bandwidth and both can drive additional displays, TB4 does offer the full specification standard. Thunderbolt 4 comes with additional security through Intel VT-d DMA protection, can support longer cables with lengths of up to 2 meters, and also tree/branch daisy chaining, whereas previously only linear chaining was supported. 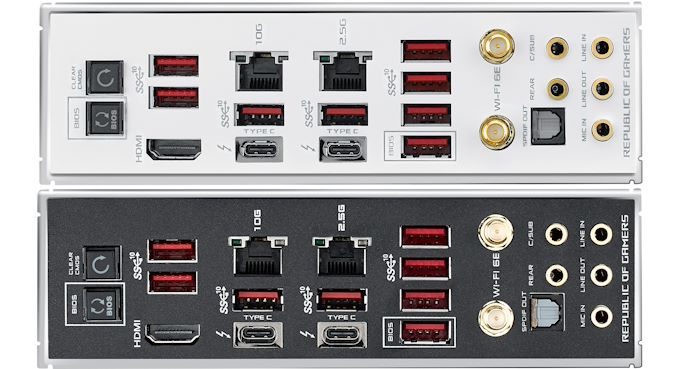 Another benefit for users looking to attach extra screens is Thunderbolt 4 can support up to two 4K and one 8K display, which is a marked improvement over Thunderbolt 3. Systems that want to enable TB4 will do it though the vendor integrating the Maple Ridge chip on the board, as with any other external (external to the chipset) controller.

Through our contact with vendors, we anticipate a total of 55+ models for Z590. Most of these are currently announced and detailed, with a small number announced but waiting for a full detail. Simply put, there will be no shortage of models to select from. Although users might start to baulk at the pricing, with only a small number of boards dipping below the $200 mark.

Surprisingly there isn't much in the way of micro-ATX for Z590, with availability looking limited. We have some mATX from Chinese vendor Colorful, one from ASRock, ASUS and MSI, but little else. For small form factor enthusiasts, ASRock, GIGABYTE, and MSI include a small selection of mini-ITX boards. The vast majority of the Z590 product stack is ATX, although the flagship models from each brand feature E-ATX PCBs with a large selection of PCIe, storage, and premium controller options.

ASRock's product stack includes the return of its Phantom Gaming series, which focuses on gaming elements, with the Taichi sitting at the top as the brand's flagship Z590 model. The entry-level Pro 4 series offers an ATX and micro-ATX version, while ASRock's only mini-ITX board to be announced at this time comes via the Z590M-ITX/ac.

ASRock will likely announce even more models for Z590, as the custom monoblock Z590 Aqua is a potential model that could be announced at a later date. We also expect a Phantom Gaming mini-ITX model at some point, which typically offers plenty of premium features.

As is typical with ASUS, it has a large Z590 stack, and we have information available for most of its Z590 models; some information is still yet to be announced, however. Some of the models yet to be fully unveiled include the overclocking focused Maximus XIII Apex (Q1), and the Maximus XIII Extreme Glacial with a custom EK monoblock and the standard Extreme variant (also Q1). The usual suspects make its way onto Z590, including the ROG Maximums XIII series, now in its 13th iteration, as well as the mid-range ROG Strix, the budget-focused TUF Gaming, and Prime series.

From the pricing information we have on hand, ASUS's cheapest model will be the ASUS Prime Z590M-Plus, micro-ATX. The entry-level Prime series focuses on basic yet subtle aesthetics, with prices starting upwards of $244. ASUS will also be launching a Strix series mini-ITX model, the ASUS ROG Strix Z590-I Gaming WiFi, but there isn't much in the way of information. We will keep things updated, though, as more details are made available.

Biostar has announced a trifecta of models for Z590, with its top model, the Z590 Valkyrie sitting as one of the most premium desktop models we have seen from them in a long time. The latest Valkyrie series uses the native USB 3.2 Gen 2x2 Type-C support, 2.5 gigabit Ethernet, and has a fresh and funky design. Biostar's Racing series is also back for Z590 through the Z590GTA model, with an ATX PCB and a solid entry-level feature set.

Biostar is usually a sure thing for at least one mini-ITX model per chipset, and the Z590I Valkyrie is the smaller sibling of the ATX model. It seems like Biostar has gone all out on its Valkyrie models to use the Z590 chipset to its fullest, especially with support for up to DDR5-5000 and 2.5 GbE with premium HD audio codecs.

GIGABYTE has the largest stack with 15 new models unveiled at present. Starting from the top with the GIGABYTE Z590 Aorus Xtreme WaterForce, it caters to the enthusiast market, with top tier level features and a custom monoblock for custom liquid cooling. The Aorus Z590 Xtreme has the same PCB, without the monoblock, and the Aorus range extends from the top end down to the mid-range.

MSI has also gone all out with its Z590 range, with at least 13 new models and more potentially on its way, including an EK monoblock Carbon X version. The MEG, MPG, MAG, and Pro series all return for Z590, with the MEG Godlike sitting as the current flagship with a premium feature set throughout. The Unify range makes a return with an ATX and mini-ITX pairing. The MPG series, which is aimed at gamers with performance in mind, dominates the brand's mid-range, with pricing starting at $264 up to $324. The cheapest starts at $189

Geared more at the entry-level, the MAG series fires out a Torpedo, and while it might not dent the flagships solely on features, it certainly makes a splash. This is in addition to the Tomahawk which is commonly associated as one of the best models based on price to performance on the market. Lastly, MSI has its Pro series, which targets professionals, and MSI announces a 12VO variant without the need for the 5 V and 3.3 V rails.

There are quite a few models outside of the major players.

Colorful predominantly aims its models at the Asian market with its iGame series and its take on the American Naval fleet with the CVN series.

Supermicro also has two models, one with Wi-Fi and one without, although neither of these includes a PLX chip, which has been a feature in previous generations. This could be an option further down the line.

On the next page is a summary of each Z590 model power delivery from information which we received from manufacturers or through analysis of the physical board. Each subsequent page is a brief analysis and rundown of each model announced, culminating with a conclusion of board features versus other models.