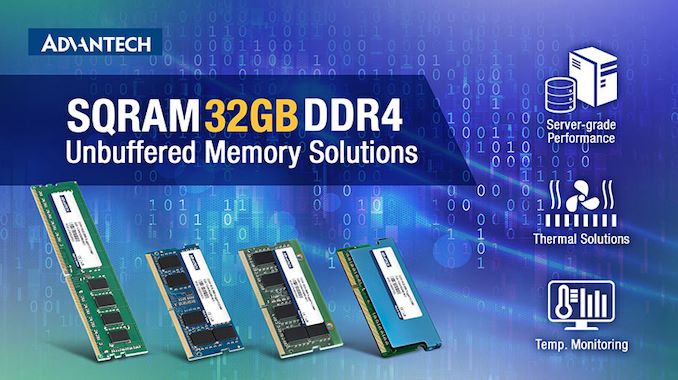 Advantech, a maker of server-grade memory, storage, and other components and solutions, is introducing a new lineup of 32 GB unbuffered DDR4 memory modules. Designed for high-performance computing (HPC) applications, the SQRAM-brand DIMMs use the latest DDR4 DRAM devices from Samsung, and feature additional reinforcements to make them suitable for industrial applications.

Along with class-leading capacity for an unbuffered DIMM, Advantech’s SQRAM-brand memory modules are also aimed at applications that require high long-term reliability. In particular, they're rated to withstand extreme temperature ranges (between -40°C and +85°C or between 0°C and +85°C), and they feature 30u micron thick golden connectors for extra reliability. The modules also come equipped with a heatsink and are supported by the company’s SQRAM Manager utility to monitor DRAM temperature and alert about overheating.

Advantech will start sales of its 32 GB SQRAM DDR4-2666 memory modules in the near future. The company hasn't announced any official prices at this time, but as both high-capacity and industrial-grade DIMMs, they are very much high-end parts and will undoubtedly be priced accordingly.