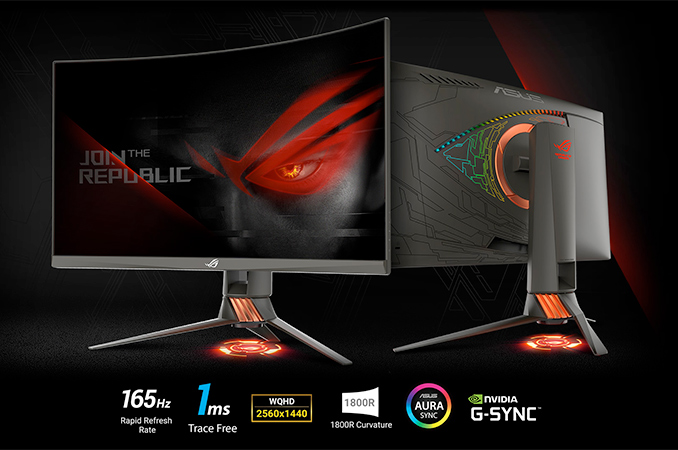 ASUS is about to start selling its new ROG Swift PG27VQ, the company's latest 165Hz monitor. Aimed at gamers who are looking for a very high responsiveness in games along with ultimate style, the monitor features a curved panel and 1 ms response time. To make design of the ROG Swift PG27VQ unique, ASUS added its RGB Aura Sync lighting to the back of the display.

RGB LED lighting has (inexplicably) become a signature feature of gaming hardware in 2017. As we've already seen, there are motherboards, graphics cards, memory modules, chassis, PSUs, keyboards, mice, even SSDs with RGB LEDs, on the market these days. Earlier this year ASUS decided to complete the list of RGB lighting-enabled devices with its curved ROG monitors. So far, the company formally introduced three of such displays, but only the relatively inexpensive ROG Strix XG27VQ has been released commercially so far. ASUS is going to change this in the coming weeks as it is getting ready to start sales of the considerably more expensive ROG Swift PG27VQ.

The ASUS PG27VQ uses a 27” TN panel with a 2560×1440 resolution, an “overclockable” 165 Hz refresh rate, a 1 ms response time as well as a 1800R curvature. Responsiveness is a major selling point of the monitor, which is a reason why the manufacturer went with a TN panel featuring 400 nits brightness, 1000:1 contrast ratio and 170°/160° viewing angles, nothing unexpected from TN here. As for ergonomics, the ROG Swift PG27VQ can adjust height, tilt, swivel or can be attached to a VESA wall mounting. Those interested in a multi-display configuration will be glad to know that the display has thin bezels. As for connectivity, the monitor comes with an HDMI 1.4, a DisplayPort 1.2, a dual-port USB 3.0 hub and an earphone jack. 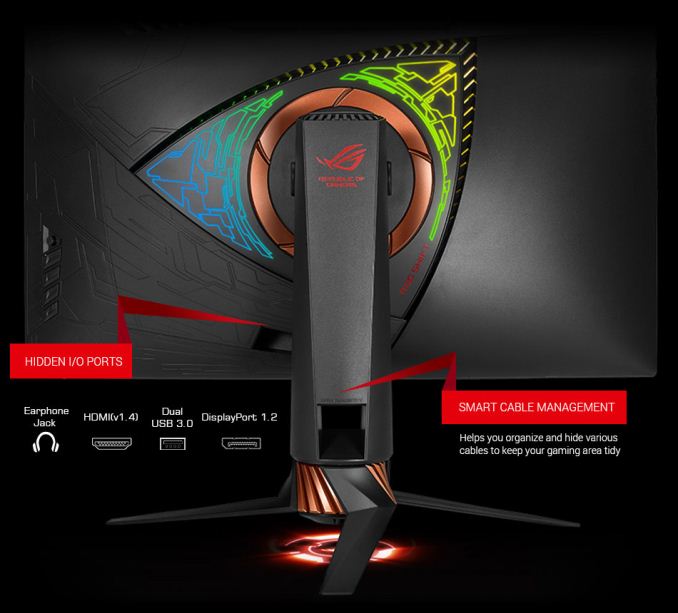 Just like any other ‘Republic of Gamers’ monitor from ASUS, the ROG Swift PG27VQ features a host of features aimed just at gamers. Firstly, it supports NVIDIA’s G-Sync dynamic refresh rate technology with ULMB, which is designed to make fast-paced actions look sharper. The combination of a 165 Hz maximum refresh rate, 1 ms response time as well as G-Sync with ULMB should deliver rather impressive experience. Secondly, the monitor comes with the ASUS Aura Sync RGB lighting on the back to customize the look of the display or even synchronize its lighting with other components featuring the technology. In addition, the LCD has ROG’s LED lighting projection signature on the bottom, which owners can customize as well. Thirdly, the monitor supports the ASUS GamePlus modes, which are present on other gaming monitors by the company, and ASUS GameVisual color profiles for different type of content. Finally, the monitor is compatible with NVIDIA’s 3D Vision technology for those who still have the shutter 3D glasses kit (or plan to get one now).

The ASUS ROG Swift PG27VQ is expected to be available from leading retailers like Amazon and Newegg in several weeks. Being a unique offering, the new unit will cost $799.99, a price tag well above average for a 27” monitor.