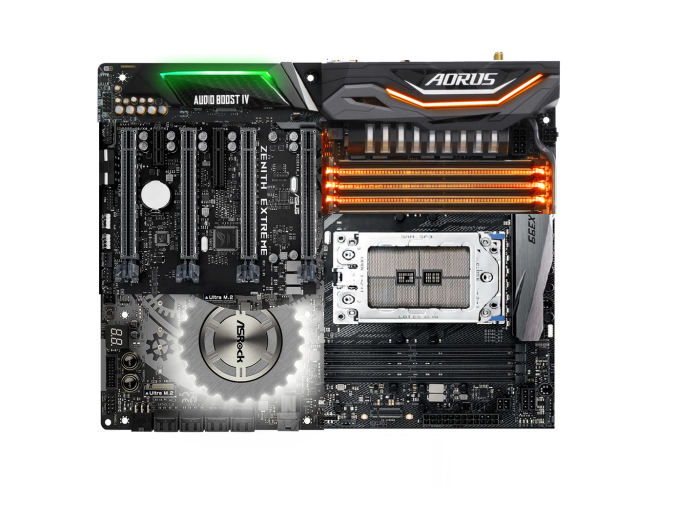 With the release of AMD’s Threadripper CPUs into the HEDT market, board partners have released new motherboards based on the X399 chipset. Consumers are going to see quad channel memory, native 4-Way SLI and Crossfire capabilities, more full-speed M.2 slots, added 10G network ports, and more on the new platform. We're taking a quick look at each of the motherboards that the vendors are promoting in the market, as well as a few upcoming teasers.

A big takeaway from our AMD Ryzen Threadripper 1950X and 1950X review is the increase in CPU connected PCIe 3.0 lanes. A full 60 lanes are available to the PCIe slots and M.2 drives, while 4 lanes head off to the chipset where it's muxed for USB, SATA, low-level I/O, and other features. The increase in CPU PCIe lanes is set up to allow for a lot more flexibility connecting devices using PCIe bandwidth. 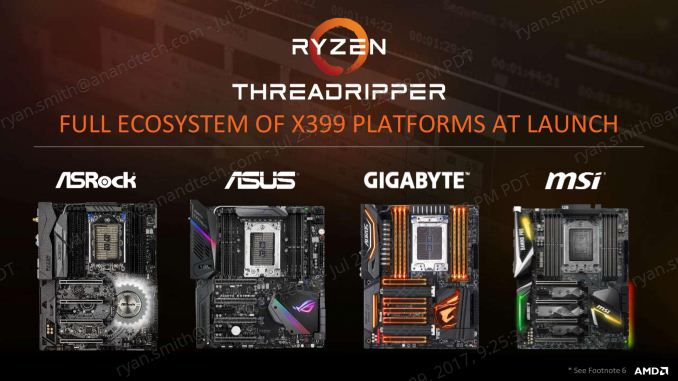 The four major players, ASRock, ASUS, GIGABYTE, and MSI, have launched X399 motherboards for Threadripper. These boards equip the massive 4094-pin socket with eight DIMM slots to cover the four memory channels and then differentiate themselves in PCIe configuration, IO, styling and software support.

Unlike Ryzen, the base processor is not a true SoC as the term has evolved over the years. In order to get the compliment of SATA and USB ports, each Threadripper CPU needs to be paired with an X399 chipset. So aside from the CPU PCIe lanes, the 'new' X399 chipset also gets some IO to play with:

Unlike mainstream platforms that have several chipsets to choose from that vary in capability and cost, the AMD high-end platform only has a single chipset, similar to Intel's X299. As we've learned over the last few months, some elements of the motherboard base cost, such as the socket, can cost a pretty penny to the board manufacturers, which in turn will be forwarded on to the user. These motherboards appear to start somewhere around $249-$299, with the top board so far set at $549. Guess which one AMD sent us for our CPU review.

When PCIe is the game, it becomes time to play with controllers and ports to see what fits. It all starts with the underlying diagram for Threadripper and X399: 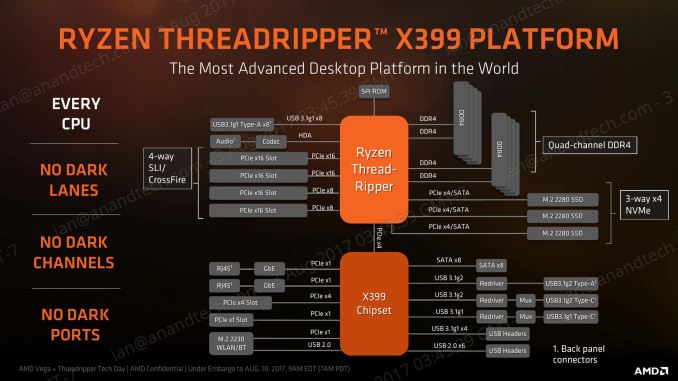 AMD's marketing on the left is set out to explain that each product in the Threadripper and X399 line will be 'fully enabled' - none of the chips will be limited in PCIe lane counts or DRAM for the sake of segmentation. AMD is happy at this point to keep segmentation limited to cores, frequency, and L3 cache.

The diagram shows the two hubs for everything to connect to: the CPU and the chipset. The CPU has 60 PCIe lanes, provided in 3 or 4 PCIe root complexes at x16 each (the diagram above suggests x16/x8/x16/x8). These will often go towards the main PCIe slots to support add-in cards like GPUs, or they could be partitioned off for RAID controllers or fast ethernet if required. In total, AMD has stated that the platform can support six GPUs maximum. The CPU also supports eight USB 3.1 (5 Gbps) Type-A ports, quad channel DDR4, and support for up to three PCIe 3.0 x4 storage drives for 3-way NVMe.

Threadripper CPUs reserve four PCIe lanes for the chipset, which similar to Intel acts like a PCIe switch for more IO - although AMD only offers a few lanes here compared to Intel's 24 PCIe 3.0 x4 lanes.

From the chipset there are eight PCIe lanes, which AMD here has suggested reserving two for gigabit Ethernet, four for a PCIe x4 slot, one for a PCIe x1 slot, and one for a WiFi module. Alongside the PCIe lanes are eight SATA ports, six USB 2.0 ports, four USB 3.1 (5 Gbps) Type-A ports, one USB 3.1 (5 Gbps) Type-C port and two USB 3.1 (10 Gbps) ports with appropriate redrivers. In a change to what we normally see on Intel motherboards, AMD lists SPI and Audio features as coming from the CPU rather than the chipset.

As part of the launch, AMD is wanting to promote the different ways in which an X399 motherboard could be arranged depending on the workload requirements.

Each of these potential configurations would run into several thousand dollars a piece for a full build - the M.2 drives were suggested at 512GB minimum, with the SATA drives in RAID configurations as well. AMD is making no joke; they want to be the premium platform.

With each of these motherboard overviews, we like to cover a few of the newer controllers to hit the market that motherboard manufacturers might take advantage of. Given the recent X299 launch on the Intel side, not much has changed since. The big parts to enter the consumer space are Aquantia's multi-gigabit ethernet controllers. 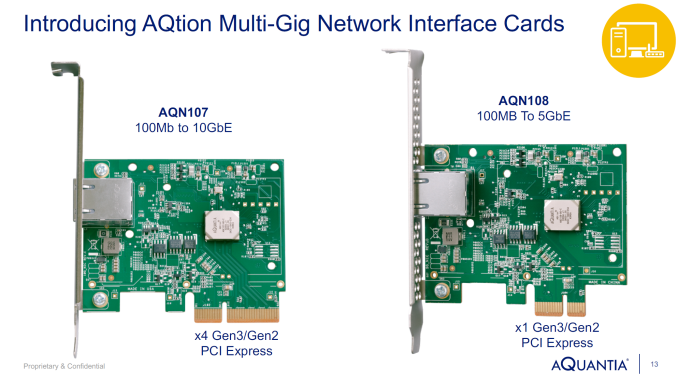 Aquantia launched two ethernet controllers: the AQC107 which supports 100MB, 1G, 2.5G, 5G and 10G, and the AQC108 which supports 100MB, 1G, 2.5G and 5G, all through standard RJ45 connectors. Motherboard manufacturers can use these controllers directly on the boards, or bundle them in add-in cards like the AQN107 and AQN108 above. We've seen cards from ASUS and GIGABYTE already hit the market based on these controllers, while ASRock and MSI prefer to integrate them direct.

The second controller worth mentioning is the updated ASMedia ASM3142 controller, providing USB 3.1 Gen 2 (10 Gbps) functionality to motherboards that need more USB 3.1g2. Originally we saw the ASM1142 single lane controller, while the ASM2142 integrated a dual lane design such that all the ports had peak bandwidth when multiple ports are in use. ASM3142 is a low powered version of the ASM2142, but still supporting all the ports at peak bandwidth.

Third is the updated Realtek ALC1150 audio codec, known as the ALC1220. The ALC1220 improves peak SNR while adding new functionality. ASUS run a customized version known as the ALC1220A, which removes some of the excess function for a stripped down version unique to them but configured in a partnership with Realtek.

The seven motherboards we have to discuss are: