This particular design from Asus appears to be an attempt to entice the bulk of advanced users, gamers and overclockers alike, by attempting to combine practical features, RGB lighting, and advanced configurability. In order to keep the retail price competitive, Asus’s engineers did not install any features and/or technologies that are of little interest to the average user - such as those that currently display very low adoption rates like SATA Express and U.2 connectors. On the other hand, we can see that the engineers are focused on boosting the primary selling points of the motherboard. 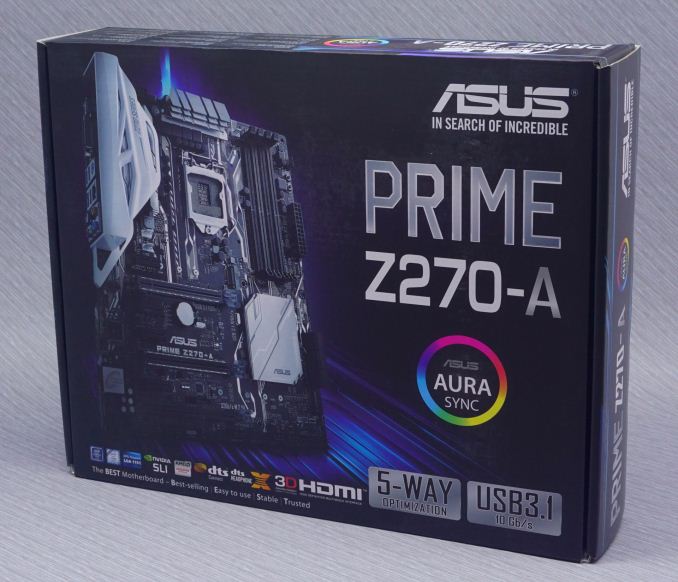 We get the following:

Asus is not particularly generous with their bundled items but that is understandable considering the price range of the Prime Z270-A. The user’s manual is only printed in English but is very detailed. A QR code at the front of the manual brings the user to a basic but adequate DIY guide. Asus also includes a “CPU installation tool”, which is just a plastic holder that can be used to place the CPU into the socket without touching it with bare hands.

The quick connector (Q-Connector) is a simple but handy item for users that allows them to connect all of the case’s cables in a single move. The rest of the items consist of the typical DVD with the drivers and other software, a standard I/O shield, and three black SATA cables. Three is an interesting number not often seen in motherboard bundles, but facilitates a set of boot SSD, storage HDD and optional ODD.

Asus’s designers had to make the Prime Z270-A a motherboard that is both functional and also aesthetically pleasing, given the price and the target market. They hit the nail on the head with the placement of the headers and connectors, placing all of the internal headers across the bottom and the SATA connectors to the lower right corner of the motherboard. The only exceptions are the internal Thunderbolt header and one of the USB 2.0 headers, which are right above the third full-length PCIe slot.

A physical switch right above the headers at the lower right corner of the motherboard is an interesting addition. This switch allows the user to force the RAM modules to activate their XMP settings regardless of any BIOS settings, removing the need to go into the BIOS (which very few users do). The first two full-length PCIe slots feature a metal brace that assists in rigidity, preventing wrapping and damage due to excessive force, weight, or the combination of the two. This brace also indicates the slots most suited for GPUs. The third full-length PCIe slot and the DIMM slots do not feature such a brace.

Beauty lies in the eyes of the beholder, but we feel that Asus crossed some lines here. As a motherboard that features RGB lighting, the colors of the motherboard need to be neutral and its design simple, effectively matching any lighting color selection. Black and white are both neutral colors, yet the use of both on the same motherboard is highly contrasting, and the presence of silver/chrome parts makes matters even worse. The design of some parts, such as the plastic cover over the rear I/O ports, feels unnecessarily complex. Although the LED lighting is very well applied and bright and with virtually no dead spots around the motherboard, its physical design may be too extravagant for some. 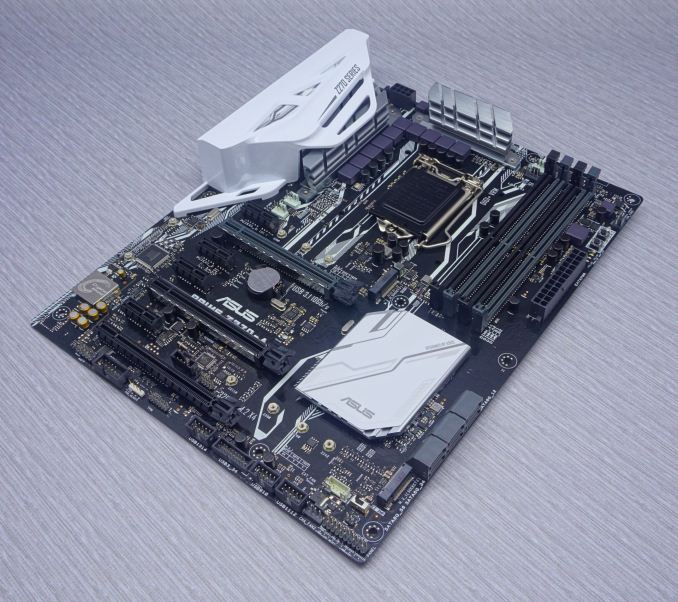 The space between the two primary PCIe ×16 is arranged in an expanded setup, allowing for better cooling when two large cards/GPUs are installed. The third full-length PCIe slot can operate up to ×4 mode and, considering that it also lacks a metal support, the designer meant it to be used for devices other than GPUs, such as PCIe SSD drives or RAID controllers. SSD drives installed on the third full-length PCIe slot can be included in Intel RST/RAID configurations with the onboard M.2 slots, as all the drives will come from the chipset. Typically, the top M.2 slot is right above the first PCIe ×16 slot and can support devices up to 80 mm long (2280 type). Using an SATA drive on the first M.2 slot will disable one of the SATA ports, but PCIe drives will have no such effect. The second M.2 slot is below the motherboard’s chipset and supports devices up to 110 mm long (22110 type). This slot shares its bandwidth with two of the SATA ports and will disable them if a PCIe ×4 drive is installed. 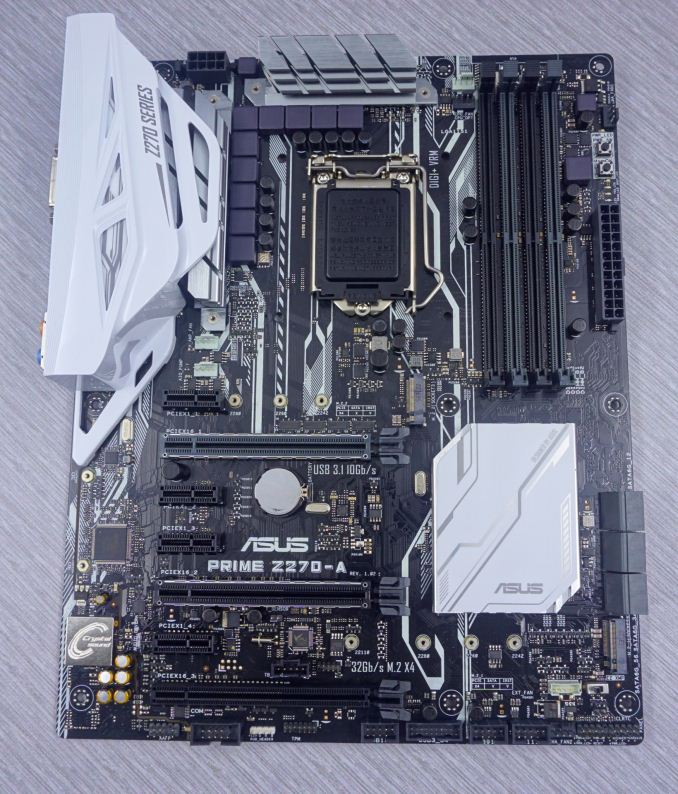 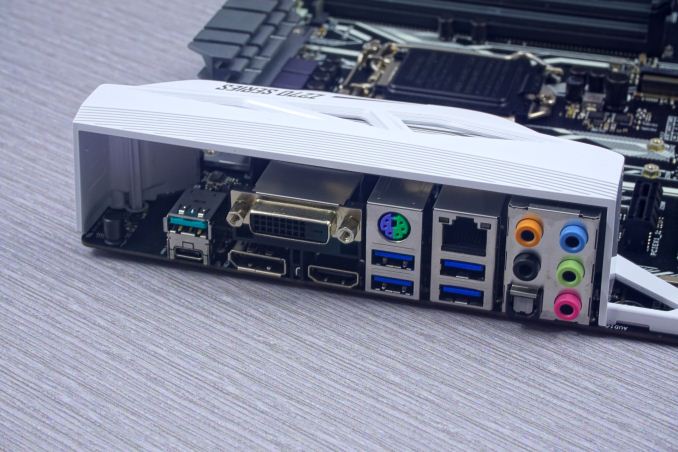 Asus went slightly overboard with the thickness of the thermal pads that they are using, which appears to be a good thing considering how good the contact between the heatsinks and the chipset/VRMs is. Unless very severe overclocking is going to take place, these heatsinks are more than adequate for the cooling needs of the motherboard. 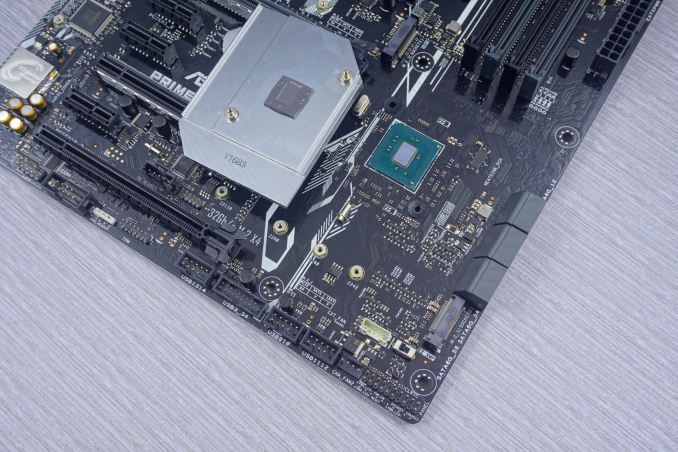 The company painted and rebranded most of the components, which makes some of them difficult to identify. We could only identify some of the black polymer capacitors to be Nichicon FPCAP products. The only exception is the small audio capacitors at the bottom left corner of the motherboard, which are clearly branded and supplied by Nichicon. At this point, we should note that the audio circuitry is on a section of the PCB that has been mostly physically separated in an attempt to minimize noise and distortion from other components. 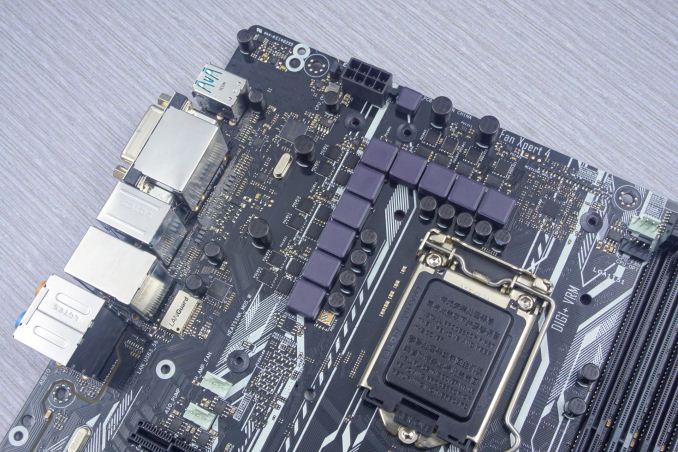 The VRM circuit is a 10-phase (8+2) design, with the phases distributed to the four different input voltages that the modern 1151 CPUs require (Core, I/O, Graphics, and System). The DIGI+ VRM controller is unique to Asus. The 4C06B and 4C09B MOSFETs are supplied by ON Semiconductor, which is common on recent Asus motherboards. 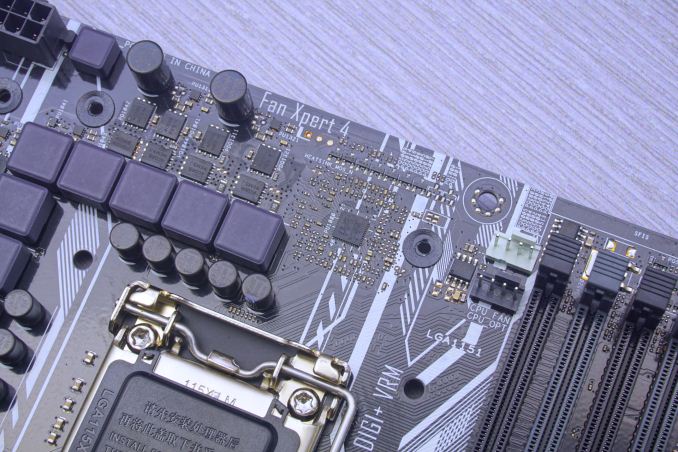