Regular readers of my twitter feed might have noticed that over the past 12/24 months, I lamented the lack of 10 gigabit Ethernet connectors on any motherboard. My particular gripe was the lack of 10GBase-T, the standard which can be easily integrated into the home. Despite my wishes, there are several main barriers to introducing this technology. Firstly is the cost, whereby a 10GBase-T Ethernet card costs $400-$800 depending on your location (using the Intel X520-T2), followed by the power consumption which requires either an active cooler or a passive plus good airflow to shift up to 14W. The bandwidth can be as important (PCIe 2.1 x8 for the X540-BT2, but can work in PCIe 3.0 x8 or x4 mode), but also it is limited to those who need faster internal networking routing. When all these factors are added together, it does not make for an easy addition to a motherboard. But step forward ASRock. 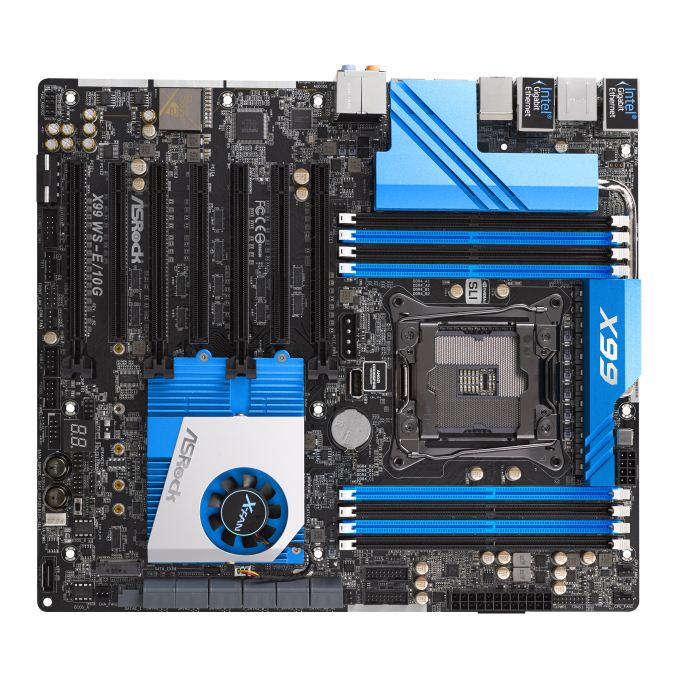 The concept of the X99 WS-E/10G is simple. This is a workstation class motherboard aimed at prosumers. This is where 10GBase-T makes most sense after all, at the users that have sufficient funds to purchase a minimum $800 Netgear 10GBase-T switch and measure their internal networking upgrades in terms of hundreds of dollars per port, rather than cents per port. The workstation motherboard is also designed to support server operating systems, and is low profile in the rear for fitting into 1U chassis, similar to other ASRock WS motherboards.

In order to deal with the heat from the Intel X540-BT2 chip being used, the extended XXL heatsink is connected to the top heatsink on board, with the final chipset heatsink using an active fan. This is because this chipset heatsink arrangement also has to cool two PLX 8747 chips which enable the x16/x16/x16/x16 functionality. If a prosumer has enough single slot cards, this can extend into x16/x8/x8/x8/x8/x8/x8 if needed. Extra PCIe power is provided via two molex ports above and below the PCIe connectors.

Aside from the X540-BT2 chip supplying dual 10GBase-T ports, ASRock has dual Intel I210-AT Ethernet ports also for a total of four. All four can be teamed with a suitable switch in play. The key point to note here despite ASRock’s video explaining the technology, and which sounds perfectly simple to anyone in networking, is that this does not increase your internet speed, only the internal home/office network speed. 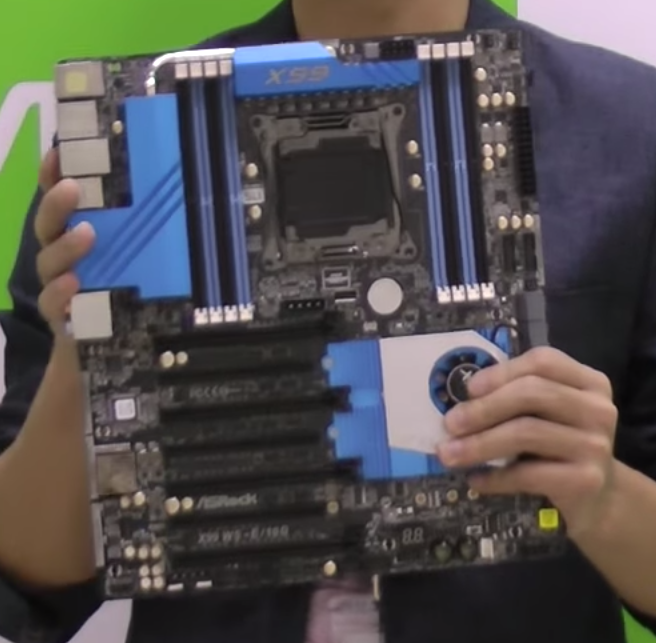 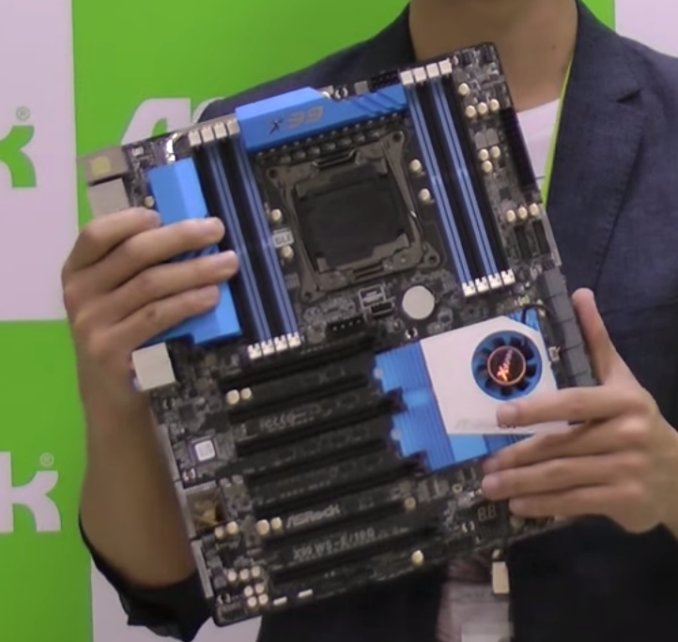 The rest of the motherboard is filled with ten SATA 6 Gbps ports plus another two from a controller, with also SATA Express support and M.2 support. ASRock’s video suggests this is PCIe 2.0 x4, although their image lacks the Turbo M.2 x4 designation and the chipset would not have enough lanes, and as such it is probably M.2 x2 shared with the SATAe. Audio is provided by an improved Realtek ALC1150 codec solution, and in the middle of the board is a USB 2.0 Type-A slot sticking out of the motherboard, for dongles or easy OS installation out of the case. There are eight USB 3.0 ports on the board as well.

Like the X99 Extreme11, this motherboard is going to come in very expensive. Dual PLX 8747 chips and an Intel X540-BT2 chip on their own would put it past most X99 motherboards on the market.  To a certain extent we could consider the Extreme11 design, remove the LSI chip from it and add the X540-BT2, which still means it will probably be $200-$300 more than the Extreme11. Mark this one down at around $800-$900 as a rough guess, with an estimated release date in December.

Thinking out loud for a moment: 10GBase-T is being used here because it is a prosumer feature, and prosumers already want a lot of other features, hence the combination and high price overall. The moment 10G is added to a basic motherboard for example, using a H97/Z97 (and reduces the PCIe 3.0 x16 down to x8), a $100 board becomes $400+ and beyond the cost of any other Z97 motherboard. Ultimately if 10GBase-T were to become a mainstream feature, the chip needs to come down in price.