ASRock Releases X99 Extreme11: So I Heard You Like Storage 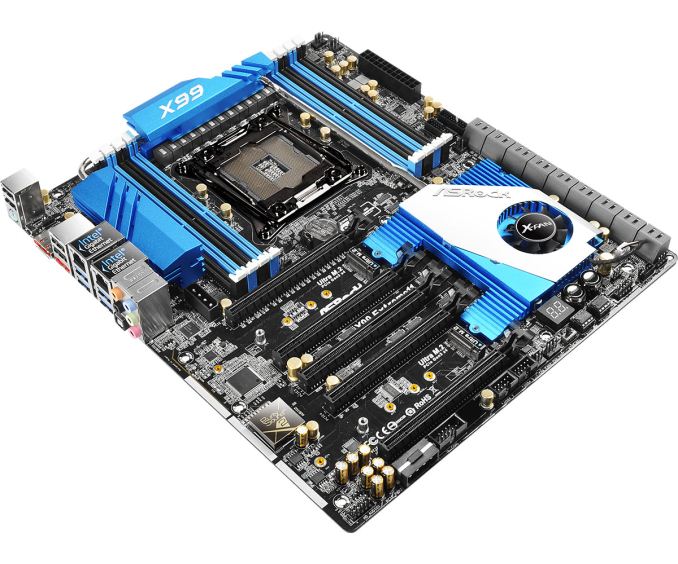 Now insert the X99 version of the Extreme11. It gets a bit tricky here, because SATA is not the only storage around. Add into the mix that the chipset supports 10 SATA ports on its own then there is the potential for something silly, or awesome, or perhaps a little of both. The X99 Extreme11 uses the same LSI SAS 3008 without the port multiplier, but add in the 10 chipset ports X99 already provides and it gives a total of 18. This LSI chip uses eight PCIe 3.0 lanes and supports RAID 0/1 only, but still allows ASRock to publish 6.1 GBps peak read/write when top end SATA drives are connected to each port.

The X99 Extreme11, similar to the Z87, uses two PLX chips to achieve x16/x16/x16/x16 support along with the LSI chip. To throw some more into the mix, the motherboard also has two Ultra M.2 slots, with both supporting PCIe 3.0 x4 connectivity and 22x110 sized drives. These M.2 x4 slots are still good for 2.8 GBps according to ASRock, and while they won’t be RAID capable in hardware, a software layer might provide an interesting project. 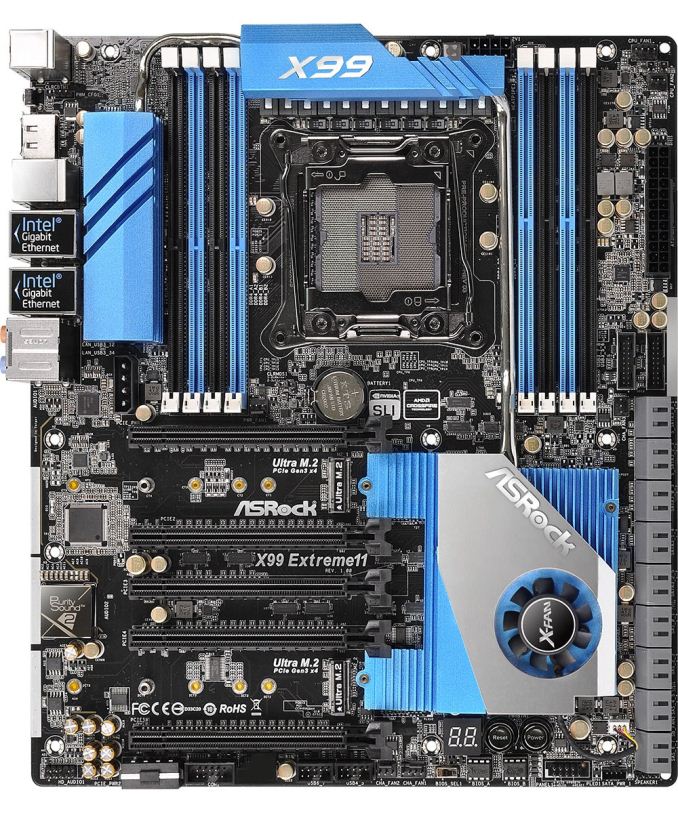 The motherboard will support Xeons with either UDIMMs or RDIMMs, along with ECC support. Networking is provided by two Intel NICs, the I218-V and I211-AT, with support for Teaming. The PCIe slots will support x16/x16/x16/x16 even with the 28-lane i7-5820K, although using that CPU will disable the second M.2 x4 due to the lack of bandwidth.

ASRock is keen to promote their 12-phase power design, which we see paired with large heatsinks. A heatpipe connects all three heatsinks, with the heatsink on the left there only to provide extra surface area. The chipset heatsink is also dealing with the LSI controller, hence the size and the active cooling. Users in the past often express concern about small fans like this, although it can be disconnected if the user has their own sufficient cooling.

The board has eight USB 3.0 ports, six from the chipset and two from an ASMedia controller powering two of the rear IO ports. Also onboard is a COM header, seven fan headers (only two are 4-pin), Realtek ALC1150 audio in Purity Sound 2 and a dual BIOS topology. Because of the use of 4-way PCIe, there are two connectors on board for additional VGA power, although these are molex connectors which I disapprove of. One of them is to the left of the middle of the board, making cable management a nightmare.

The Rear IO has two eSATA ports, both of which are shared with specific SATA ports on the motherboard, meaning only one can work at one time. The back panel also has a PS/2 combination connector, four USB 2.0 ports, four USB 3.0 ports, the two Intel network ports and audio.

I would not be surprised if the X99 Extreme11 ends up being the most expensive X99 motherboard on the market. The two PLX 8747 chips, as well as the LSI 3008, are not cheap for the end-user. Though if a user wants to wire up a large Xeon, a ton of memory, four GPUs, a dozen or more storage devices or any combination therein, then the price of the motherboard might be quite low down on the list. The X79 Extreme11 retailed for $600, so I suspect that this motherboard will be in the same ballpark.

I have requested a review sample, and hopefully we can delve into the interesting PCIe arrangement under the hood. It will be interesting to see how everything is wired up. A full specification list can be found on ASRock's X99 Extreme11 page.