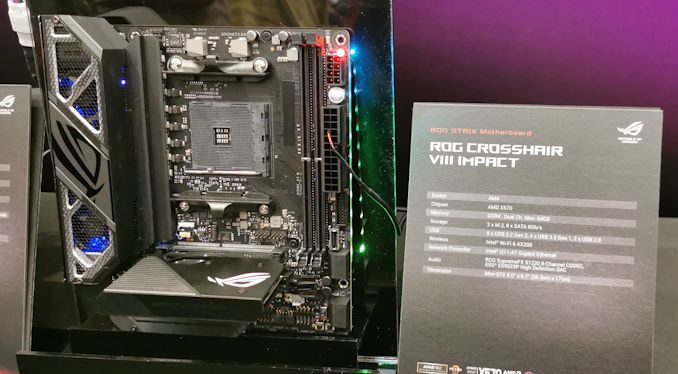 On the back of AMD's X570 chipset reveal, ASUS has launched a wave of new 3rd generation AM4 models to complement the impending Ryzen 3000 series processors. Not seen since Intel's Z170 chipset, the Impact represents a comeback of one of the most premium mini-ITX motherboard ranges for desktop. We now have the ASUS ROG Crosshair VIII Impact.

The biggest surprise of the unveiling of the ASUS ROG Crosshair VIII Impact it's based on the mini-DTX form factor which is similar to mini-ITX, but with a slightly longer frame with the intention of adding an extra expansion slot onto the PCB. This is signified by the inclusion of a SO-DIMM.2 slot for PCIe 4.0 M.2 drives, with enough space to spare after adding a heatsink too. Below this is a full-length PCIe 4.0 x16 slot which is coated with ASUS Steelslot armor reinforcement. The design itself follows a more subtle ROG theme with an-all black PCB, black heatsinks and a mesh rear panel cover which features cooling fans to keep the X570 chipset cool. There are also multiple RGB LED lighting zones which users can customize via the ROG Aura Sync software. 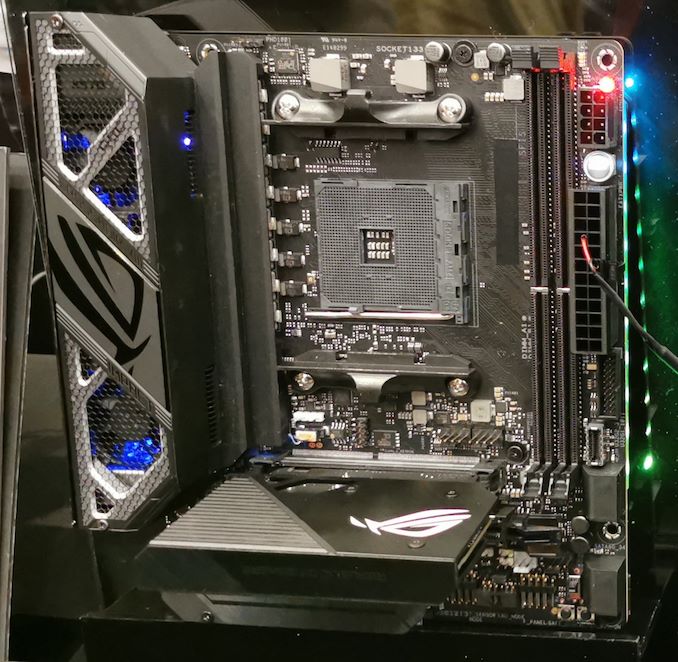 Included on the mini-DTX sized PCB, the ASUS ROG Crosshair VIII Impact has two M.2 slots which can be installed onto heatsinked caddy which goes into the SO-DIMM.2 slot.  Also featured are eight SATA ports which is impressive given the board's form factor. On the networking side is an Intel I112-AT GbE LAN port, and the Impact also benefits from the new Intel AX200 Wi-Fi 6 enabled wireless adapter. A Realtek SupremeFX S1220 HD 8-channel audio codec, and an ESS ES9023P HD DAC make up the boards onboard audio solution. 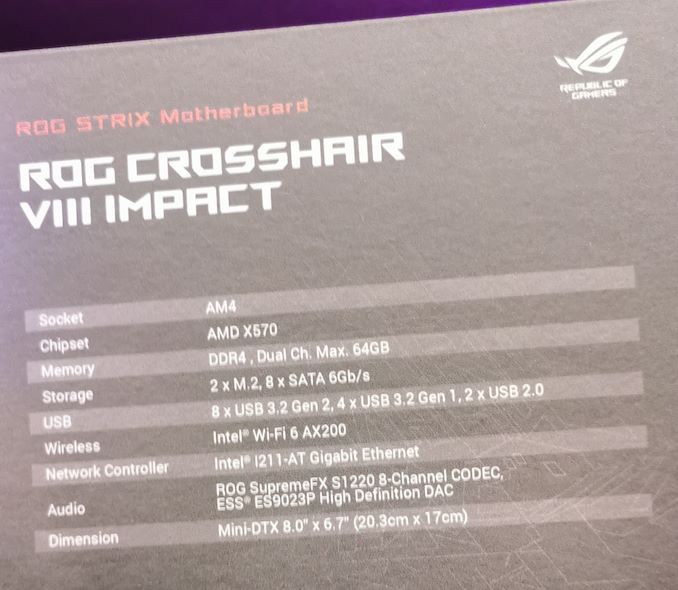 While the limitation of a smaller form factor hasn't hindered the storage, it certainly does with the memory as the Crosshair VIII Impact has two memory slots with support for up to 64 GB of DDR4 memory. The board also boasts up to eight USB 3.1 G2 ports, four USB 3.1 Gen1, and two USB 2.0 ports. The rear panel also includes a reset CMOS switch, an LED debug, and a BIOS Flashback button.

ASUS looks to have put a lot of faith in AMD's new Ryzen 3000 series processors judging by its X570 launch line-up by reintroducing a series that held so much weight in the mini-ITX desktop space. There is currently no information on pricing or availability as of yet, but we expect all the announced X570 motherboards to launch before AMD releases its Ryzen 3000 series processors on 7/7.